SELINI hotel is known for its excellent service and its home atmosphere! The services to our guests are:

At the hotel entrance you can find the reception desk where our smiling styff will settle all your accommodation matters in no time! Our personnel will assist you and take care of any inquiries, provide you all the neccessary information you may need in order to make your stay as pleasant & enjoyable as possible. Reception is open from 8:00 a.m. until 23:00 p.m.

Start your day with a delicious breakfast. Enjoy a hot aromatic cup of coffee or a cup of tea and get energy for the day's activities with a delicious butter and Greek marmelade onto a fresh hot piece of bread. For your breakfast, we always choose the best quality products like cheese, ham and fresh eggs. End it up by drinking a fresh juice and you're ready to start! Breakfast is served by us, in the breakfast lounge, from 08:00 a.m. until 10:00 a.m.

Relax in a comfortable sunbed under the Greek sun and if you feel hot, take a dive in the pool! Order a fresh orange juice or a beer from our friendly staff and enjoy our pool area. Throughout the day refreshing drinks and small snacks are served at the pool-bar. Send your vacation photos to your friends or manage your business matters, using the Internet connection of our free wi-fi network. In the evening, under the stars of the magnificent Cycladic sky, enjoy a glass of local wine or a drink with your friends. We will always be there to make your beautiful moments, even better!

We are always available to inform you about the beauties of our country and help you explore and know the island, arranging sightseeing tours by land or by sea. We will be more than happy to help you get to know and enjoy the island by choosing various activities such as: Hiking, mountaineering, horseback riding, sailing, diving, photography, helicopter ride. We will also deal for a taxi call, for your transportation to and from the port or the airport, for car or motorbike rental and of course we will provide first aid or transfer you to the health center of the island. You also may use messaging services via facsimile (fax), by email (e-mail) and traditional mail. As part of our efforts to improve the functioning of our hotel, but also provide the best and qualitative service to you, please inform us about your arrival time INFORMATION: The Check-in takes place after 15:00 p.m. and Check-out until 11:00 a.m. (Displayed hours have been adjusted due to covid 19) 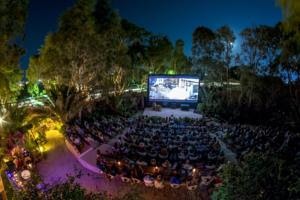 (1,1 km) – Listed as one of Europe’s best, Kamari’s open-air cinema offers the chance to kick back in a deck chair with a cocktail under the stars. 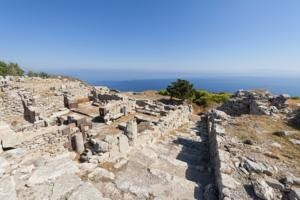 (1,8 km) – Perched at Mesa Vouno Mountain, this archaeological site forms the remains of a 9th-century Dorian colony. It is named after the island’s mythical ruler, Theras.
Read More… 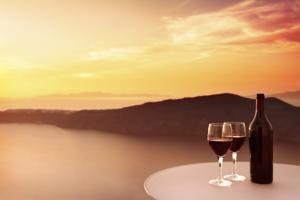 (2,2 km) – www.artemiskaramolegos-winery.com Artemis Karamolegos Winery is hosting visitors every day from all around the world in the newly designed place, for a unique taste experience of not only the wine but local plates too with a nice view of the Aegean Sea.

The prehistoric settlement of Akrotiti on the island of Santorini (Thira) is one of the most important sites in the Aegean. In prehistory it was a well connected Minoan port town, with connections to mainland Greece and as far afield as Egypt and Syria. As the town was covered in ash following a volcanic eruption on the island, making this one of the most significant archaeological sites in Greece.

From the findings of the excavations it is now known that the area of akrοτιri was first inhabited during the late neolithic period (4500 bc) and by the 18th century it had developed into a city. Very interesting history, remarkable the discovery of the city in combination with a visit to the archaeological

Because it is housing the ancient wall paintings etc.

Collections including: sculptures from antiquity to the roman period. Ceramic inscriptions and clay figurines from the geometrical period to the hellenistic period.